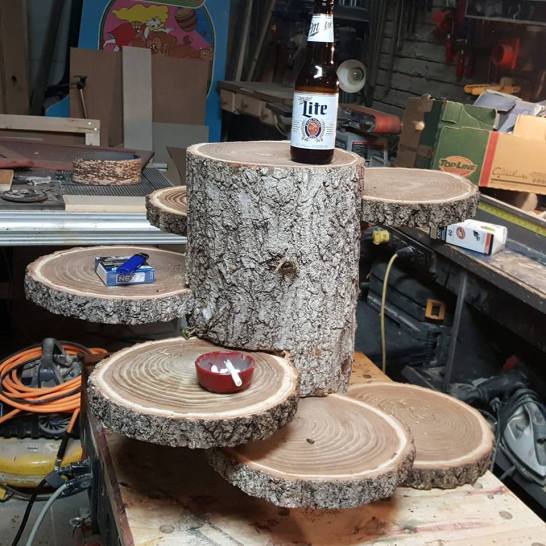 Alright, this one is REALLY late, but I do have an excuse, as I always do.

I’ve had a tonne of other projects I’ve had to get done this week, most of them for other people, so I didn’t get much chance to make my ROW Check-In post. Sorry.

Like I said, this week has been rather hectic since the last Check-In, and has mostly been occupied by trying to finish a project I promised a cousin of mine. Her good friend is getting married soon, and my cousin asked if I could make a very unique cake/cupcake stand for the reception. It’s an outdoor reception, with a “Lumberjack” theme, so I had to do some “Chainsaw Art”, which is something I’ve never done before. I do have to admit, I’m rather happy with the results so far.

As I mentioned in my last Check-In post, I’ve decided to submit the first 2000+ words of my draft to a local writer’s group I’ve joined for critique. I’ve spent quite a bit of time editing and polishing the passage I’ve chosen, which is something I initially avoided doing. I didn’t want to start editing this work until it was completed, but I just couldn’t bring myself to submit it in such a raw form.

I’ve even let someone else read it, which was really nerve-wracking for me. That did help quite a bit with the proof-reading though, so I am glad I did it.

I’m very nervous about submitting this passage. While I’ll be grateful for any help and advice I can get, it’s always difficult for me to stay objective about any type of criticism, even if it’s meant to be constructive.

But, I have no choice now. I’ve emailed the copy to the group, so that die has been cast. I’ll have to deal with the aftermath.

Besides that, things have been rather quiet. I’m still trying to get myself back on my work-life schedule, which hasn’t been easy because of the frequent layoff weeks we’ve been getting since the fall. I’m really hoping we work straight through until our summer shutdown in July, but if I do get another week or two off, it will give me some extra time to work around the house and finish up some other languishing projects.

Though I’ve fallen short of my daily writing goal a couple of days this week, I have managed to keep writing every day, and am inching towards the climax of the story. I know I’ve said that before, lol, but it remains frustratingly true. Someday, this monstrosity will be finished, I promise.

Yeah, I haven’t been doing as well with this one lately. The shift back to work and the extra projects I’ve taken on has kind of thrown me off-kilter.

I’m going to make a real effort to get back on track with this goal after the weekend.

Since the last Check-In I’ve written another 3500 words, but fell short of my 1000 words per day goal on a day or two. I’m hoping as I get used to being back to work, I can get back to my daily goal consistently.

I did break my commitment to not edit until I finished the draft because of my decision to submit a passage for critique to my writing group.

I’ve done some polishing, proof-reading and editing, to the submission, because I really didn’t want to submit something that was truly “raw”.

I think it’s good. Better than I had feared it would be, actually. One thing I really do like, as did the person I let read it, is that the tension in the passage builds up very well. I know it still has a ways to go, this is only the first pseudo-edit after all, but I have to admit I’m kind of proud of it.

I’ve also managed to cut the original word count down by around 20%, which is great.
I’m hoping the other members of the group enjoy it and offer some really constructive advice.

We’ll see how that works out.

I finally finished John Ringo’s A Hymn Before Battle, a military sci-fi novel.

While I did enjoy it, I did find it a bit of a slog to get through. The military jargon was at times hard to follow, but then again, I’ve never served, so that all might have gone over my head. Sometimes, as well, the author used similes that just didn’t make sense to me, such as having the aliens compare things that would be ubiquitous to them to things only a human would have knowledge of.

I’m not sure if I’ll continue reading the series, though. The book just didn’t grab me enough to make me want to continue with it.

Next up will be Anthony Horowitz’s Moriarty, a sequel to his Sherlock Holmes tale The House of Silk. I really liked the first book, and am anxious to read this one.

I’ve continued to watch/read vlogs and blogs related to the craft of writing since the last Check-In and got some great advice and encouragement from each one. They’re listed below…

28 Dos And Don’ts: A Must-Have Checklist To Improve Your Writing – Amanda Patterson

How to Increase Tension in Your Novel – Vivien Reis

Well, that’s it for me this Check-In. Hope you’re all doing well.