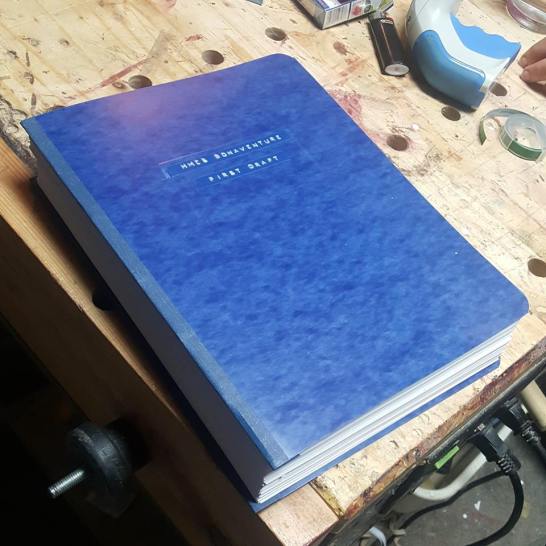 It’s only been a couple of days since my last Check-in, which was already a day late, so there really isn’t all that much to report.

As usual, I’m struggling a bit to get back in the groove of returning to work and living like a vampire again.  It seems to get harder and harder the older I get to flip back and forth between sleeping like a normal person, and a nocturnal creature, but I’m trying to manage it.

Yesterday, I attended another writer’s meet-up.  This one was put on by a different group than the one I attended over the weekend.

This group was more focused on critiquing each other’s work.  It was a little more “serious” of a group, but that may have had something to do with the location – it wasn’t held in a bar, and there was no beer to be had. 🙂

It was a good group of people, all earnest in their efforts and their desire to help each other out.  I didn’t bring anything to critique this time, as I was a bit shy and wanted to remain as unobtrusive as possible, but have been invited to do so if I attend the next meeting, which I am considering.

That may mean breaking my commitment to not edit until I finish the draft I’m working on, as I don’t know how comfortable I’d be bringing something so raw to present to the group.  I may end up polishing whatever I decided to present a bit, but we’ll see.

Other than that, I’ve done a little more work on the next set of doors/drawer fronts for the kitchen cabinets, and hope to have them ready to install by the end of the coming weekend.  I have a four-day weekend because of the holiday, so I’m confident I can accomplish that goal.

As far as the writing goes, I’ve only written about another 1500 words, but I’m getting close to starting on the climax of the story.  The set-up for the big confrontation between the main protagonist and the main antagonist is inching along, and I’m hoping to be elbow deep into that carnage by sometime next week.  After that, it’s anyone’s guess as to how long it will take to resolve that conflict. 🙂

Otherwise, I think I’m doing pretty well.  Things have been a lot calmer this past week than the previous few, and I’ve had time to process much of what was troubling me, so I’m hoping I’ll find myself on a more even keel very soon.

On to this Check-In’s Goal Breakdown…

While I’ve been managing to continue to eat healthier these past few days, I have to admit that I haven’t been keeping up with my exercise routine.

The return to work has, as usual, messed with my schedule.  I’m hoping that as I get back into the 3rd shift groove, I can get back to my regular workout routine, and not let inertia set in.

Since the last Check-In I’ve written another 1500 words, which is a bit short of my 1000 words per day goal.  I’m hoping as I get used to being back to work, I can get back to my daily goal consistently.

I’m saving this goal for when I finish the first draft as well.

I don’t want to start editing until the draft is done. I’m a horrible self-editor, so I’m really trying to not go back and edit while I write.

I haven’t had a lot of time to read lately, which is a shame.  I’m still stuck where I’ve been for the the last couple of Check-In’s, but I’m going to try and make a better effort to get back to reading regularly.

I haven’t had any chance to read these last few days, as I’ve been busy with writing and doing chores about the house.

I’m still on page 294 of 363, but I hope to get back to reading soon and finish this book so I can move on to the next one on my list.

I’ve continued to watch/read vlogs and blogs related to the craft of writing since the last Check-In, and got some great advice and encouragement from each one. They’re listed below…

How to Write a Strong Opening for your Novel – Kim Chance

Well, that’s it for me this Check-In.  Hope you’re all doing well.