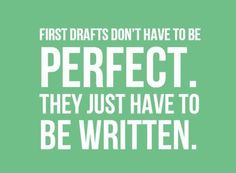 For those of you who are still following me on my quest to write a novel, here’s my (late, again) weekly progress break-down.

This past week I went back to work after an extended holiday/layoff period. It’s always a tough adjustment going from living like a normal person back to living like a vampire again (I work 3rd shift), and the older I get, the harder it gets.

This past Thursday, we had an event to attend, which was also an anniversary party of sorts. I had a great time… too great 🙂 and so Friday was a bit of a wash as far as being productive went.

I don’t know whether it’s this time of year or my upcoming birthday, but January always seems to be a bit of a downer for me, so between fighting the blues, acclimating to my work schedule, and maybe some post-holiday blahs, it wasn’t a very good week for me overall.

I hit my writing goals more days than not, though just barely, so my word count isn’t as high as it should be for the end of this week, and word count is something that’s been weighing on my mind lately.

The manuscript is now above 115,000 words, and there’s still a lot of story to tell.

That fact had me down a bit, I’ll admit. My desire to start editing now has been hard to overcome, and often, while I’m trying to write, I get distracted by thoughts of what parts that I’ve already written that should be cut out. It really is affecting my writing, and dredging up the old voices telling me that I should probably just give this whole silly idea up.

One of the other writers in one of my online writing groups did give me a bit of perspective, though… her advice was not to worry about the word-count, or how long the draft is getting. She said that I probably just need that many words to work out all of the details of the story that’s in my head, and then I can go back and cut out what ends up being un-necessary later. I’m trying to hold on to that, but I think piled up with everything else, the word count thing is contributing to my blue moods of late.

I’m going to try and pull myself out of this slump over the next couple of days, and really work to make my output consistent again.

I was really hoping to be in the home-stretch with this draft by now, but I’m thinking this is going to take longer than I expected it to.

Oh, well, I didn’t think this would be easy. I guess I was right 🙂

Hope you’re all having a good weekend, despite the weather.